This is all about Tilou’s first hack.  It teetered on the brink of disaster for a moment or two, but it had a happy ending.  Read on…

When I came back from my weekend away, I asked how Tilou was getting on.  Impeccable was the answer.  He had been ridden in the big arena twice and had behaved perfectly.  Alexandrine had even achieved a couple of steps of canter with him.  She was planning to take him out for his first hack that afternoon, and MC was bringing Quieto up to the farm in order to accompany her.  She hoped to get a decent canter going on a track in the woods near the farm (one of the few canter-able tracks in the area).  Would I like to bring Flurry and go too?

I so nearly said yes.  And then I thought, Flurry’s had a week off and he’s been stuffing his face with spring grass for all of that time.  He can definitely be naughty when he’s feeling good in himself.  Cantering in a group, even a small group of three, could switch him from Nice to Naughty, and I didn’t want to upset Tilou’s training.  So after thinking for a moment, I said no, but I would follow on foot to take photographs if that was ok.

I arrived back at the farm at the appointed hour.  The ladies and their horses were soon ready for action, which began in the arena.  Not only was this Tilou’s first hack, but it was also his first time to be ridden in the company of another horse.  They walked around the arena once or twice, Quieto in front and Tilou following, with Alexandrine on the ground.

I’ve seen her do this several times with young horses.  She walks alongside the horse, in exactly the same manner as she does when mouthing them, until she feels the horse is settled, and then she mounts.

Both horses were very calm, so we left the arena and took the trail into the woods, with the dogs Nuts and Doug in attendance.  Nuts is the lab type – he’s a stray who turned up at the farm a couple of months ago and never left.  Doug is MC’s dog.  He’s a cross between a Bernese Mountain dog and a Patou – the local dogs used to guard sheep, very similar to Pyrenean Mountain dogs.  He’s big and woolly.  Not unlike a sheep, really.

…and we continued through the woods.

At this point, the battery in my camera died, so I switched to using my iPhone.  Quality deteriorates a little as a result.

We made our way along the top of the ridge, alongside a field of lavender.  The sun was shining, the birds were singing, the dogs were mooching around as dogs do, the horses were calm, the riders and I were relaxed and happy.

The next photo is the point where things started to go awry.  You can see in that MC is still happy as a clam, but Tilou has been startled by something.  That little speck in the distance is Doug, who had been left behind, and was running to catch up.

Tilou knows Nuts very well.  Wherever Alexandrine is, you will find Nuts, so he has been present for every step of Tilou’s education to date.  Doug, however, is another matter.  He had seen him before, for sure, but Doug is not nearly as familiar to Tilou as Nuts is.  On top of that, Doug badly broke a hind leg two years ago and, as a result, he has a peculiar, rocking and rolling gait when he runs.  My guess is that Tilou thought that DogBearSheep was coming to attack him.

Photos stopped for a few moments but I can describe exactly what happened.  Tilou barged past Quieto, who also took fright and started spinning and dancing as MC struggled to restrain him.  I leaped into the lavender A) to avoid being trampled and B) to give the ladies as much space as they needed to regain control.  Tilou is a very people oriented horse, though, and he thought he would be safe with me, so he launched himself after me.  I dodged; he followed, looking for safety in my arms, until Alexandrine managed to turn him away.  Meanwhile, Quieto danced; he realised that the threat was Doug but he still thought something desperately scary had happened to upset Tilou like that.

Finally, everyone more or less halted, as Doug nonchalantly rollicked his way towards us.  Quieto’s blood was up and Tilou’s eyes were practically out on stalks as he watched Doug approaching.  He still didn’t realise that the threat was just a dog, do I went up to Doug and patted him, hoping that Tilou would see he was part of our herd.  Then Alexandrine asked Tilou to approach me and the dog, which worked even better. 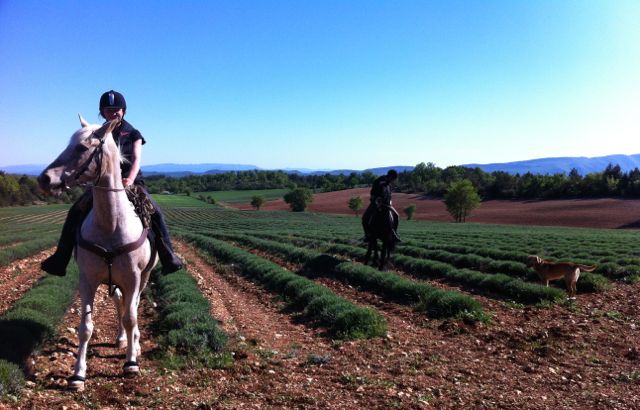 I commend both ladies on their stickability.  And I’m damn glad I didn’t bring Flurry!

MC decided to dismount and lead Quieto until their hearts stopped racing and we continued, MC in front with Quieto, Alexandrine next on Tilou, me bringing up the rear and the two dogs milling around as dogs do.

Alexandrine spotted the next danger just in time.  There’s a particularly deep puddle at the side of the trail, which was still holding water despite several weeks without rain.  Both dogs headed in for a paddle.

“I will get down,” she said.  “The dogs will frighten him when they come out of the puddle.”

Good thinking… Tilou nearly shat himself when DogBearSheep galumphed out of the puddle.  He tried to bolt forwards, but was restrained.  Quieto once again took fright when he heard Tilou panicking and he very nearly got away from MC.  Somehow, she hung on.  I think, at that point, all thoughts of remounting evaporated from her head, because she stayed on foot for the rest of the hack.

Quieto’s nerves were thoroughly shattered now, so I went out in front to be the sensible lead ‘horse’.  Alexandrine followed me, leading Tilou, and MC followed with Quieto.  Doug stayed at the back and Nuts stayed near his Mum. 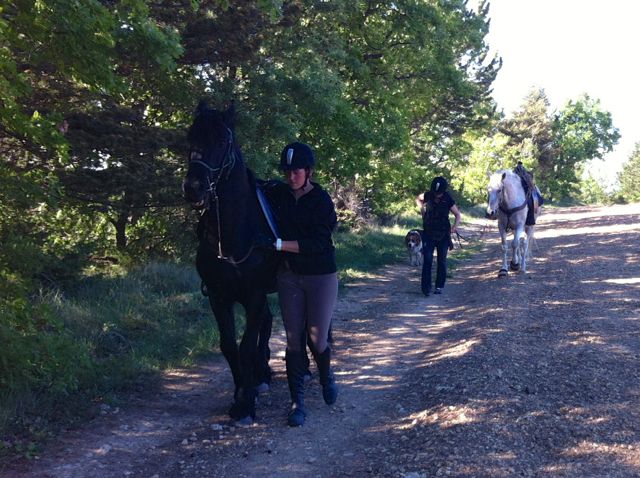 After a couple of minutes, Tilou had settled once again and Alexandrine remounted.  He was behaving fine and was striding out happily, so she asked him to pass me.  There was a moment of hesitation when he found himself in front and then he put on his big-boy pants and carried on, leading the trek.  All was going swimmingly – until we heard the roar of an engine.  A dirt-bike!  Typical!  Just when you want a nice, peaceful hack…

Alexandrine leaped off again, and I stepped out and waved my hands to ask the guy to slow down.  He very politely obliged and then stopped and waited once he had passed the horses.  What was he waiting for, I wondered.  Oh.  A quad. 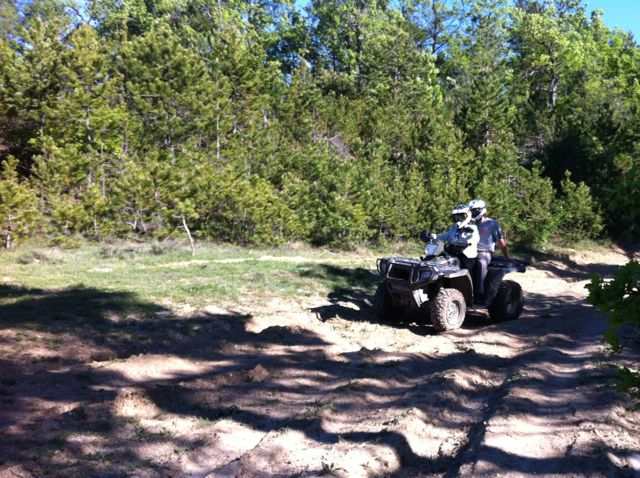 I have to say, Tilou stood like an angel.  No problem at all.  And the young people on the quad were also very polite – they know Alexandrine, of course.  It’s a small village, everyone knows everyone else.

Time to remount and carry on… Tilou took the lead again, and we turned up the would-have-been canter lane, which turned into a trot lane instead.  He happily trotted when asked, although as soon as his rider said “Bon” or “Très bien” he thought he was meant to stop.  He’s very sweet, really!

Finally we were on the home straight.  All that was left was the sudden appearance of five cars in the 200 metres from the last field to the farm entrance.  But Tilou is used to traffic and if he wasn’t bothered by the dirt-bike and the quad, he wasn’t going to be bothered by a couple of cars. 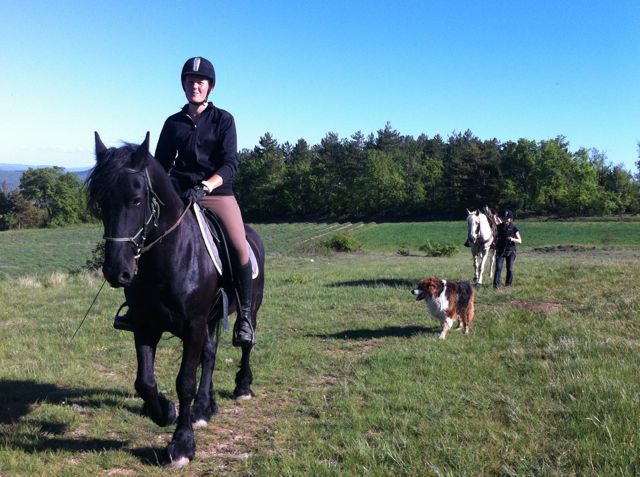 Like I said, this hack could have been a disaster, but it turned out to be a positive experience for the young horse instead, and it marks another milestone in his training.

Well, his owner has to start riding him now…