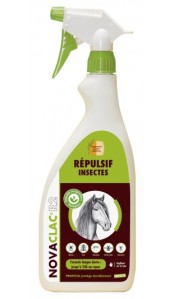 I am very good about checking weather forecasts – it might be because my father was a meteorologist.  I had been watching the weather closely, and I knew that Day 2 of our trip would be warm but very overcast.  Flies might be a problem, I thought.  We sprayed the horses liberally with fly-spray (YES!  I have found a fly spray that really works!!) and set off.

I had worked out a circular route which would follow part of a trail Anne and I did while on Le Big Trek three years ago, although we planned to cut through the woods beside Les Bayles rather than follow the road for the first section, as Anne and I had done.  It looked to be quite a long ride, but there was a point where we could change our minds and follow an alternative route home, cutting the trek short if we felt that we or the horses were struggling.

We mounted and made our way through the woods.  And, after about thirty minutes, the heavens opened.  Despite the forecast.  Just a shower, perhaps?  Well, rain patterns in Provence are very different to those in Ireland.  Clouds seem to settle in overhead and stay there, dumping rain on all below for hours on end.  Frontal systems seem to become stuck up against the Alps, and there’s never that noticeable event of a front ‘passing through’ that we’d be familiar with in Ireland- torrential rain easing off, wind changing and air temperature dropping.  No, it starts raining and it just seems to stick, usually clearing overnight.  Eventually.

The skies all around were dark and gloomy.  This looked like ‘down for the day’ rain to me.  And guess what – we were both in t-shirts, with not a coat or a sweater between us.  Genuis, right?

We agreed to cut our ride short.  Really short.  We would just go as far as St Trinit (3km from Les Bayles) and return along the road.  It’s meant to be fun, after all, and riding in the rain has never held much appeal for me (this is part of the reason we’re in Provence).   And the LSH had a great wet weather plan – we’d go visit an amazing tack shop we had discovered while we were doing Le Big Trek.

Of course, when we got to St Trinit, the rain stopped and we made the decision to keep going.  Which we regretted half an hour later when the rain started again.

We’ll go for plan B, we decided.  We were approaching the point where there was an alternative way home.  It would still be a longish ride, two hours or so.  There was no point in being soaking wet and chilled to the bone for the day.

Except, it turned out that the alternative route was completely overgrown.  It would have been impassable on foot, never mind on horseback.

Stuff it, I said (or words to that effect).  We’ll keep going.  Worst case, we can bale out and follow the road home if we’ve had enough. 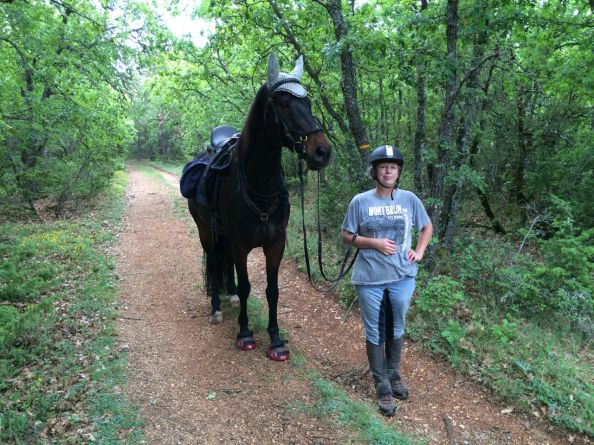 So we bravely continued.  It wasn’t too bad when we were in the woods but, once we were out in the open, the wind really chilled us.

Neither of us took many photographs.  Our fingers were a wee bit numb. 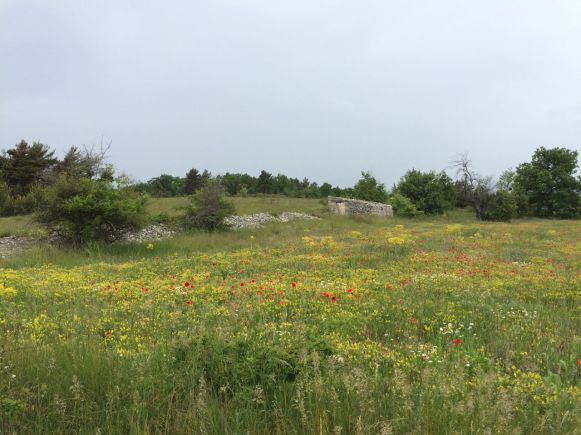 Poppies and yellow flowers under a grey sky

But, to be fair, the rain stopped just before we arrived at the village of Aurel, through which Anne and I passed three years ago.  This was Aero’s second village ever.

Not bothered by suburbia!

Aurel had more flowers (and more sunshine) three years ago…

…even though it was a month earlier in the year.

After Aurel, we followed the GR 91 towards Sault.  The first section was along a very steep hillside, overlooking Aurel and the valley below.  At this point, Aero made me aware of another profound difference between my two horses :

Flurry seems to have no concept of danger where steep drops are concerned.  He will ignore the well-trodden trail in favour of a strip of grass two inches wide, even if it is on the edge of a precipice.  Many times I have hauled him in from the brink of disaster (well, maybe) because my nerves just can’t take it.  He can be downright scary in situations like this.

Aero has done many banks, steps and drops in his former career and he was glancing down the steep slope towards the village and keeping his body firmly on the ‘inner’ side of the path which snakes along the side of the hill.  He seemed to be saying “Mum, I know all about drops and, in my opinion, this one is not safe!”

I told him not to be silly and just to keep going straight, he’d be fine.  Which he was.  And then we met two cyclists and their dog.  And it was a really narrow trail, so I dismounted and hauled Aero as far to the inside as I could.  Hell, those cyclists could fall over the edge if they wanted, I wasn’t going to risk me or my horse!

At the top of the ridge, about halfway between Aurel and Sault, we found an ideal picnic spot, where the horses could graze while we ate our lunch.

Picnicking Aero. The Micklem bridles worked out well as headcollars

We warmed up a bit while we ate, and our clothes had mostly dried out so it wasn’t too bad.

I did a check on Flurry’s feet and I made the executive decision that he should wear his boots.  We’d been told that the trails were mostly gravel from here on and I was worried that thirty kilometres in two days might be too much for him.

We fitted his Renegades, but only just.  His feet are a good deal bigger than they used to be.  Whether it was that the Renegades were too tight or whether it was that he’s not used to wearing boots anymore, but about twenty minutes later, he ripped one off and broke its cabling system as we made our way through the woods to the east of Sault.  I have to say that this is why I officially prefer Cavallo Sport Boots to Renegades.  They have never, ever come off during the course of a trek, even during the Runaway incident last year.

The LSH decided to lead Flurry as long as we were on those gravelly trails, so he walked with him for about twenty minutes.  Eventually, we came out of the woods and crossed the main Sault – St Trinit road.  We were on more normal ground there; clay soil and not too stony, so the LSH mounted again.  As we were going down into a kind of gully, we heard lots of childish voices ahead of us.  Both horse pricked their ears.  What was going on?

It turned out that 70 schoolchildren were out with their teachers for a bike ride through the woods and the loud chatter, laughter and screams were coming for the lead group who were trying to get through an enormous patch of mud.  They were good kids though.  As soon as the first one saw us, he yelled “Attention!  Il y a des chevaux!”  “Careful, there are horses!”  and they all stood to one side as we passed.  There were lots of Oohs and Aaahs and “Ils sont magnifiques!” as we rode past, and the teacher told us that there were loads more kids on the way.

I was aware that Aero has never been in a situation like this before – a narrow trail and excited children whizzing by on bicycles.  He was fab!  Admittedly, he had Flurry giving him a lead, but even so I was very impressed with him.  He never lost his cool, even when one little boy wobbled off his bike right beside us!

The rest of the ride was uneventful, apart from the fact that I was beginning to seize up, so I walked for two or three kilometres.

No wonder I was seizing up – we had covered a good 20km, and I had never really warmed up after our initial soaking.  Two tried humans and two tired horses enjoyed their food that night…