It’s been a while since I wrote about Tilou, the lovely Friesan gelding who came to Alexandrine to be broken.

Last time, he had just had his first hack through the woods which, despite some exciting moments, went pretty well.

The next step was that his owner, N, was going to start riding him, but she was still a bit nervous.  Riding Max, she accompanied Alex and Tilou on their second hack and saw first-hand that he was behaving himself.  The day after that, I ‘observed’ at one more ridden session in the arena with Alex, with N sitting beside me. 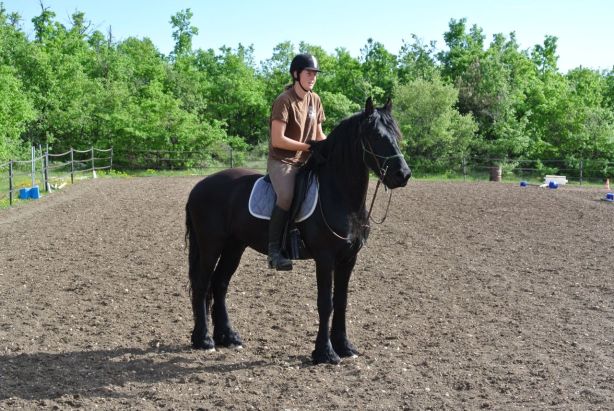 Tilou was good.  He’s not at all worried about having a rider on his back and everything he did was normal, green young horse stuff – wobbly lines, not sure about canter and super-fast to slam on the brakes as soon as he was praised!

When they were more or less finished, Alex did something I’ve never seen anyone do with a just-backed horse before :

New to the series? Here are links to the previous four posts about Tilou :