Since the end of May, Alexandrine has been breaking two of the most sensitive and complicated horses she’s ever had.  They’ve both been at the farm for almost a month and a half now and she’s only just managed to start riding them last week.  Normally, she’s in the saddle within ten days.  She has a new breaker in now, who she’s already riding after just a couple of days – he has no ‘issues’ and will possibly go home next week!

Auzzi, the little chestnut Arabian mare, was incredibly reactive to being touched, and Alex spent a lot of time with a Parelli type flag, trying to teach her that being touched was not a bad thing.

She was extremely difficult to put the saddle on and really REALLY hated having the girth touch her rib cage.

After three weeks, she was still behaving like this :

The problem was, once she panicked, her brain shut down completely and she was incapable of registering the fact that nothing bad was actually happening to her.

The breakthrough came around very slowly.  There were no miracles, no shortcuts, just constant repetition of desensitisation exercises and consistent handling.  Finally, it was time to think about riding her, but Alexandrine was very wary as she works alone.  A huge part of her method relies on the horse learning to look to her for direction when something unexpected happens, and this is difficult if she is the ‘something unexpected’ on the horse’s back!  She tried using Roger, the giant teddy bear, but that did not go well.  Then Mr Endurance kindly volunteered to be the first to back Auzzi.  And it went really well.  So well, that five days later, Flurry and I escorted her on her first trek.  We were meant to be there as the lead horse, but she didn’t need us – she seems to be a brave and confident trail horse, which is good because her owners run a trekking centre! 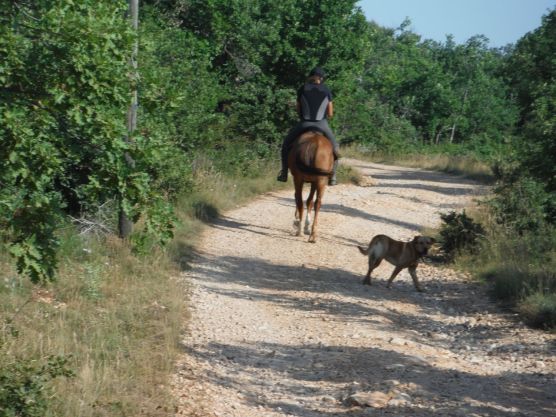 Prince, the gorgeous Appaloosa gelding, was almost completely unhandled when he arrived. 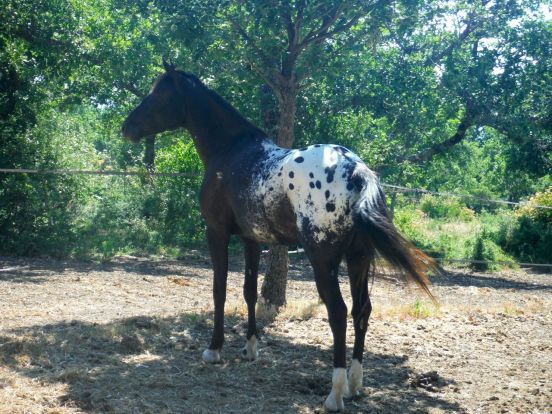 All he knew was that if he pulled hard enough on a lead rope, he could escape.  So part of the initial work with him was teaching him that pulling away was not a good idea.  And he turned out to be just as sensitive to touch as Auzzi.  Alexandrine spent the best part of three weeks just teaching to him to accept touch without reacting.  Once that was done, it was easy to saddle him up.  And from there on, he went from strength to strength.

Aero and I babysat him on his first trek last week.  At first, he was afraid of everything he saw (including lavender!), but he quickly got braver and even went in front for a while. 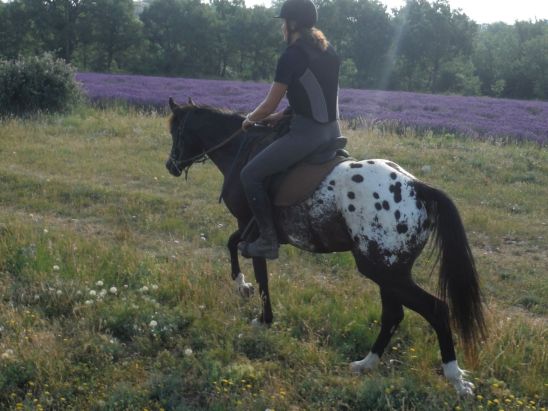 A day later, he went out in a group of four which included Flurry and I, and he behaved very well.  That is, apart from kicking out at Flurry when I got too close (Mea Culpa) and apart from reacting a little too strongly to flies.

I reckon our babysitting duties are complete with those two.  Auzzi is going home on Saturday and Prince will probably go home next week.  Good luck to them both – and their owners.