I’m usually behind the camera, so when I dragged the LSH along for a hack on Saturday, I handed him the camera and asked him to take a few pictures.

We went through the woods towards Reillanne, to meet MC, who was riding up to the farm.  We have a particular spot where we usually meet, roughly halfway along the trail.

Waiting for our friends

MC, Quieto and Doug the dog turned up a few minutes after us and we continued on our way back towards the farm.  There were hunters in the woods on the other side of the road, hence the Hi-Viz vests.  I really should invest in a proper ‘Hunting Orange’ vest.  Frankly, it’s dangerous out there.  There has already been one fatality in the area, in the department d’Isère, not far from us, when a hiker was killed by a hunter.

Quieto, Aero and Flurry are all good buddies and now expect to meet up at the halfway spot every time we go there.

It’s nice to have a couple of photos of MC and I together!  MC then offered to take a photo of the LSH and I.  But of course we had to clown around – “Kiss! Kiss!” she said…

The horses were very obliging…

…but a little bemused at the same time! 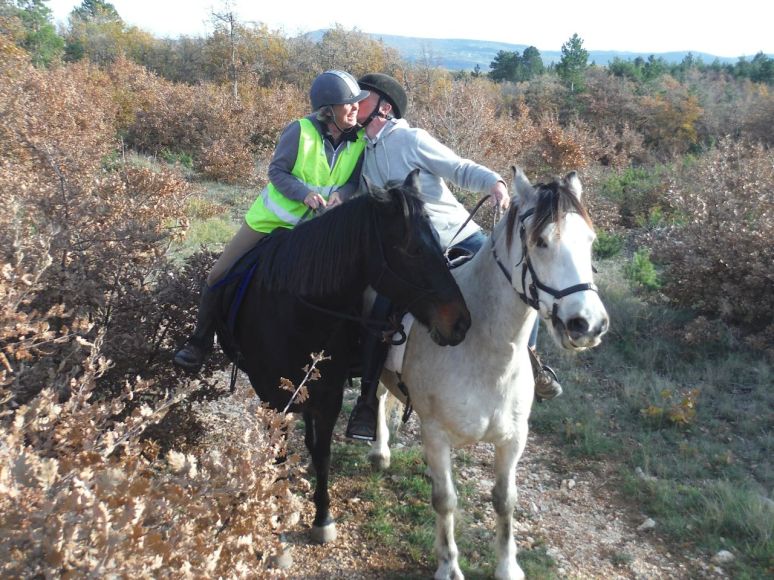 When we got back to the farm, I wanted to take advantage of my cameraman again.  I asked him to take photos of Aero’s new tricks.

He’s been standing on the ‘pedestal’ (also known as the mounting block) for some time now, in-hand and mounted.

Standing on his pedestal – Flurry does this too

I didn’t know how to get started with Jambette or Spanish Walk, so I asked Alexandrine for advice a while back.  She suggested standing him some distance from the ‘pedestal’ and ask him to step onto it, but not allow him to move forward.  It only took a couple of sessions for him to get the idea of throwing out his front feet, and he will now Jambette in-hand anytime, anyplace.  Sometimes unasked (not a good thing!).  Now he can chain together a sequence of 4 – 8 steps while moving forward in-hand – yes! Spanish Walk!  Flurry has also been learning this, but he’s not as far along as Aero.  Yet.

This was my third session asking for Jambette mounted.  I think I can say he’s got it.

Jambette – the beginning of Spanish walk

I have a notion of having Aero standing on the pedestal and Jambette-ing while up there, so we had a go.  This was our first attempt ever, and I was very pleased when he gave me a good ‘try.’  I think he is not fully confident in the stability of the stone, so I am going to work on making a better (and moveable) pedestal.

This is the first time he’s ever done this!

I felt that the mounted Jambette he had already given me and this effort on the pedestal were enough for one session, and I rewarded him with a piece of carrot and finished up.

Yes, this was one day after the Paris attacks.  Yes, we were having fun.  But, yes, our thoughts were with the victims and their families throughout the day. 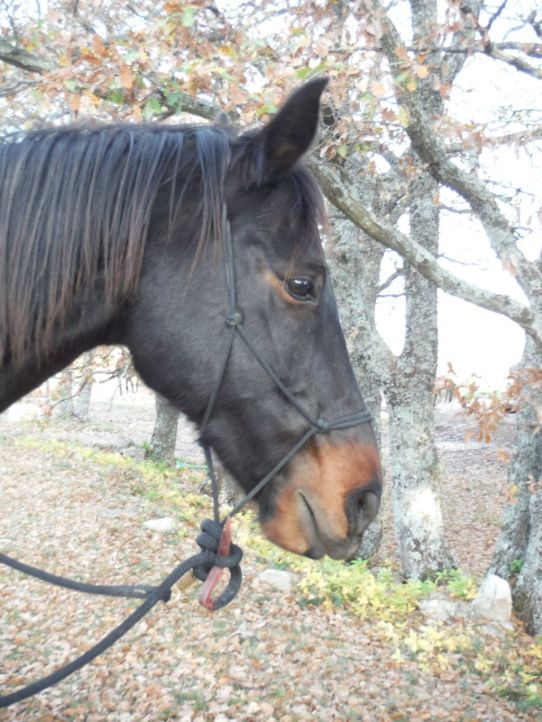