Our youngest daughter, Tansy, and her boyfriend Rowan, who lived with us for the summer two years ago, have been ‘of no fixed abode’ since August.  By choice, mind you.  First they went to the European Juggling Convention in Bruneck, Italy.  Then they spent almost three months travelling south through the Balkans, visiting Croatia, Montenegro, Albania and Greece.  They travelled by thumb, bus, train, BlaBlaCar, camping or staying in hostels as they went.  There was a certain irony in the fact that, as they travelled south, there was a steady stream of people on the other side of the Balkans travelling north, but apart from more rigorous border checks in one or two places, they were unaffected by the refugee crisis.

Finally, their money was beginning to run low and it was time to think about the future, which involves spending a year at one of France’s best-known ski resorts, Chamonix.  First they hopped on a Ryanair flight from Athens to Milan, spent the night in Milan and caught a bus to France early the next morning.  Much later that day, I went to Aix-en-Provence to pick up two very brown, very fit, very tired and very hungry young people, carrying two VERY large rucksacks.  It was wonderful to see them again, and it’s been great having them here with us.  But, to quote George RR Martin, Winter is coming.

Shortly after arriving in Provence, they visited the Chamonix valley to look for jobs and a places to stay.  Tansy found work easily enough in the neighbouring village of Les Houches, and there seems to be a good possibility of work in the same place for Rowan, so things look ok on the employment front. 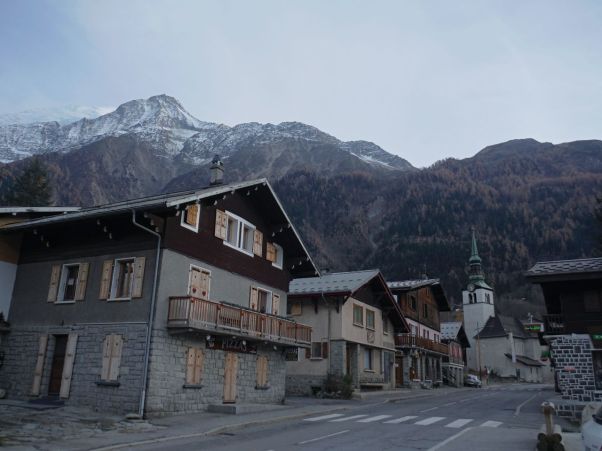 Les Houches main street, with Mont Blanc in the background

Accommodation is a different matter.  It’s very difficult to find an affordable apartment in the valley, as so much of the accommodation is used for tourists.  Not only are prices high, but many landlords demand the full rent for the winter season in advance – up to €5000.  Not many people would have that kind of cash after four months travelling, and Tansy and Rowan are no exceptions.

They’ve been scouring the internet for weeks now, with no success.  Finally, Tansy and I decided to go to Les Houches for a couple of days (Rowan has picked up some work locally and couldn’t go).  We won’t come back until we find a place and failure is not an option we said.  But we also said Yay! Mother and daughter road trip! and We’ll have fun! 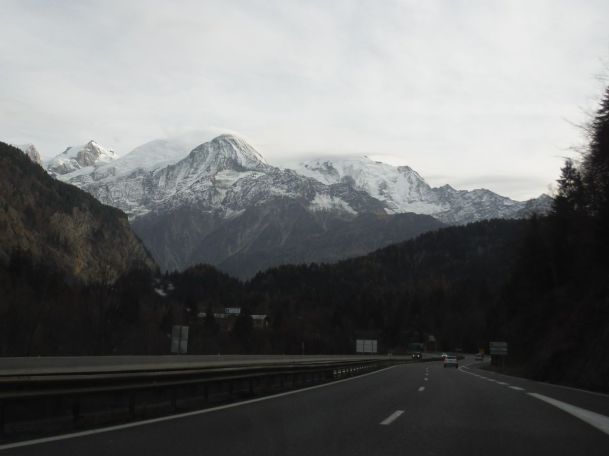 Driving into the Chamonix valley

I had never been to Chamonix before, so as we started to enter the valley I was ooh-ing and aah-ing at the beautiful scenery and the snow-topped mountains.  We were staying in a small chalet, with a guy who had responded to a plea for somewhere to stay on the Chamsocial website.  He had three enormous cats, the one in the photo below is the biggest.  The camera was kind to him, though.  None of my photos managed to show just how fat he is! 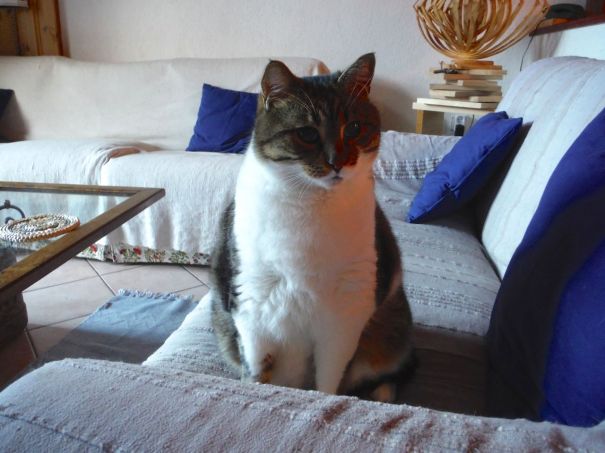 The view from the chalet :

Imagine waking up to this every morning!

We had an appointment with an estate agent to see a couple of places as soon as we arrived.  The first place was… well, it was perfect.  A one-bedroomed ground floor apartment, right in the middle of Les Houches, with a large private garden area.  The second place was a studio apartment.  As a studio, it was fine, but it was also small enough to make Tansy realise that living in one room for a year was not something that she wanted to do.  We saw one more place that day; a room in a large four bedroomed apartment in a huge chalet.  This was one of those rentals where the landlord wanted all the money up front.  It was cosy and comfortable, but there would be six people living there.  It’s a couple of years since Tansy and Rowan did the whole ‘house-share’ thing, and she wasn’t sure that she wanted to go back to that.  Photos were sent to Rowan and they decided to go for the very first place we had seen.  We had a meeting with the estate agent the next day to find out what documentation would be needed – a lot!  This is France, after all, the paperwork capital of the world!  We set the wheels in motion to accumulate everything that was needed, made an appointment for first thing on Friday morning to sign the lease, and then we essentially had a day off.

So on Thurday, we went for a hike, from Les Houches to Chamonix itself, a distance of about 10km.

It was a cold and frosty morning, and we were walking in the shadow on Mont Blanc for most of the hike, but we soon warmed up.  We had to go for 2.5km in the wrong direction initially, to get to a point where we could cross the river l’Arve and join a trail that goes through the woods on the other side. 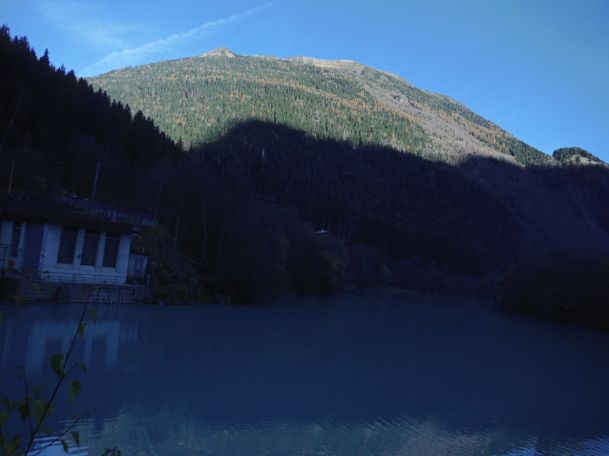 Where we crossed the river, at the sluice gates to this reservoir

See what I mean about the shadow of Mont Blanc? My poor little camera was struggling with the contrasts, but I got a couple of nice photos all the same. 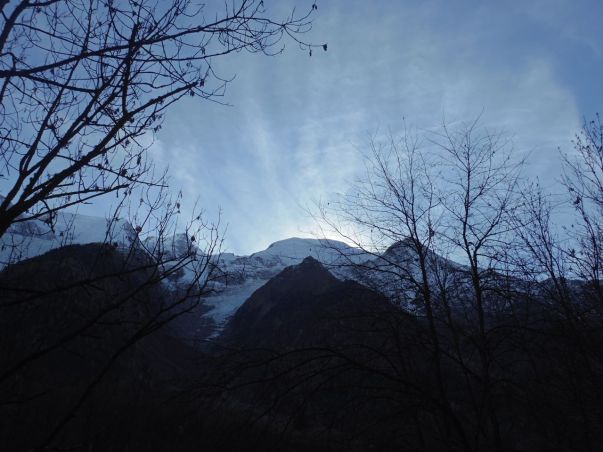 The sun trying to climb over Mont Blanc

What you can’t see in the above photo is that there is an enormous quarry between the river and Les Houches.  It kinda mars the landscape, which is a shame.

I found myself quite out of breath at one point, I think the altitude (1,000M) was affecting me.  Thankfully, the trail through the woods stays mostly just above the river, so there wasn’t too much climbing to do and, once we neared Chamonix, it levelled off completely.

Back to colour for this pretty little spot, a ruined church by a pond

An arty shot through the arched window.

On Friday morning, bright and early, we met the estate agent and signed multiple forms.  In triplicate.  In blood.  (I may be exaggerating, but only slightly).  Tansy and Rowan will be moving in at the end of the month. 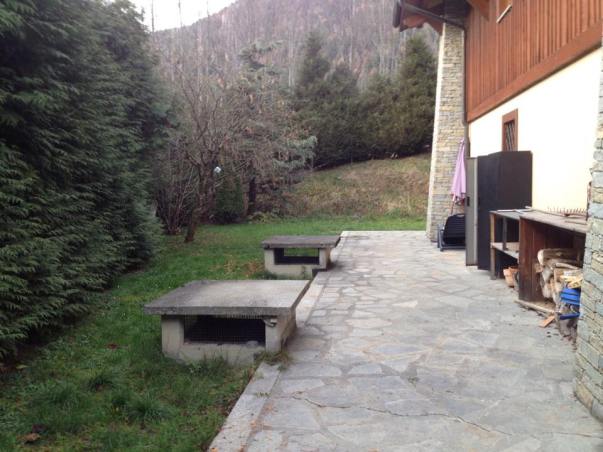 Part of their garden area. This is going to be FAB in the Spring and Summer!

The living /kitchen area. I’m in the kitchenette and the estate agent is in the bedroom on the right.

It’s been lovely having them here, but I know they are going to have a wonderful time in the Chamonix valley.

And we’re all going to be there for the New Year!  In addition to finding Tansy and Rowan’s home for the next year, we also found a place to rent for the week of New Years Day.  Our other daughter, Aideen, and her boyfriend Ben will be joining us.  I can’t wait!