The Clinic with Pauline Beulze, continued

I wish I could say that Sunday, the second day of the clinic, dawned bright and clear.  It didn’t.  We awoke to heavy rain drumming on the roof.  At least it wasn’t snowing…

Normally you can see all the way to the Alps from here. I could barely see across the field.

Desperation being the mother of invention, the tractors were moved out of the barn, leaving us with an area of about twelve by twenty metres, big enough to work in small groups.  There was one no-show that day (car trouble), leaving us with three groups of three.  It worked out pretty well, although of course all of the sessions had to be rescheduled to fit in the extra two.

The three of us who live closest to the farm were in the first group at 8AM. 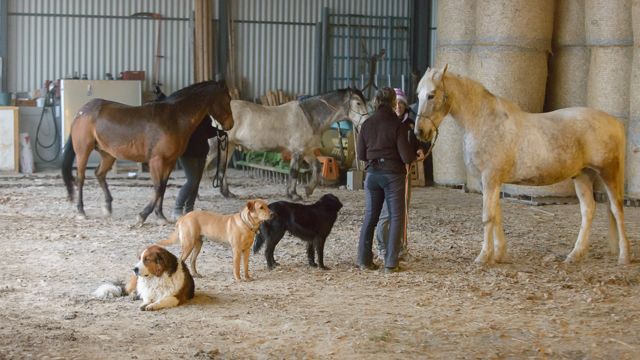 The plan was to focus on ‘close work’ and, like the previous day, it centred on moving the horse’s feet.  We started off with deplacement lateral par aspiration.  I’m afraid don’t know the English expression for this.  It’s when you ‘pull’ the horse sideways with the whip rather than ‘push’ him.  Here’s a video I made afterwards to show you guys, when I was practising this stuff with Aero.

If anyone can tell me what this is called in English, please do!

Flurry hadn’t done this for ages, but he hadn’t forgotten it.  Then Pauline showed us how to just move the hindquarters, using Flurry as her model.  This is turn on the forehand again, but it’s done by pulling rather than pushing.  You stand close to the neck/shoulder and hold the stick over the hindquarters, touching the hip on the far side to ask for movement.  The experienced horse will respond to the stick being held in the air over his quarters…

I wasn’t expecting brilliance, but Flurry was excellent!  And then I remembered that this is how I taught him to line up beside the mounting block, so of course he knew this as well.

Then next task was to move just the forehand.  Yeah, okay, I’ve never done that with either of my horses.  For this, you position yourself roughly at the girth line and hold the stick over the withers.  The experienced horse will respond to your body position and the stick being in the air.  The inexperienced horse needs a tap on the far shoulder to indicate what is required. 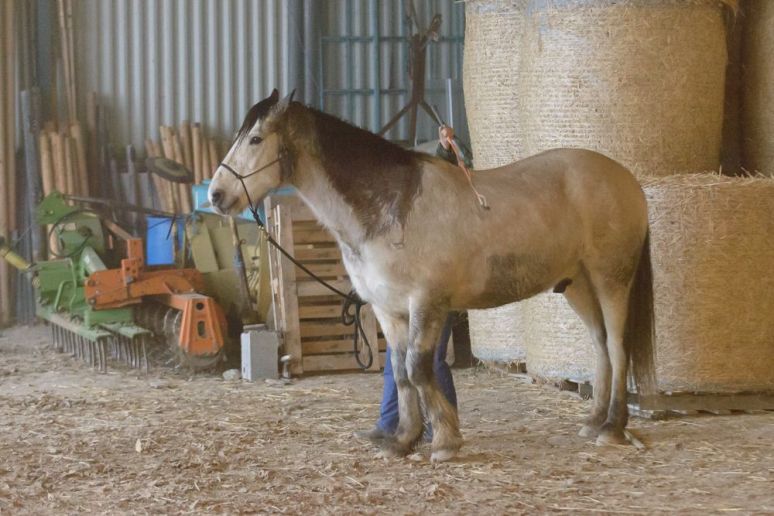 For horses that really don’t understand, Pauline advised reaching around the chest and tapping the off-side shoulder from the front, as she is demonstrating with Quieto below.  This makes it a little easier for the horse to understand what you’re looking for. 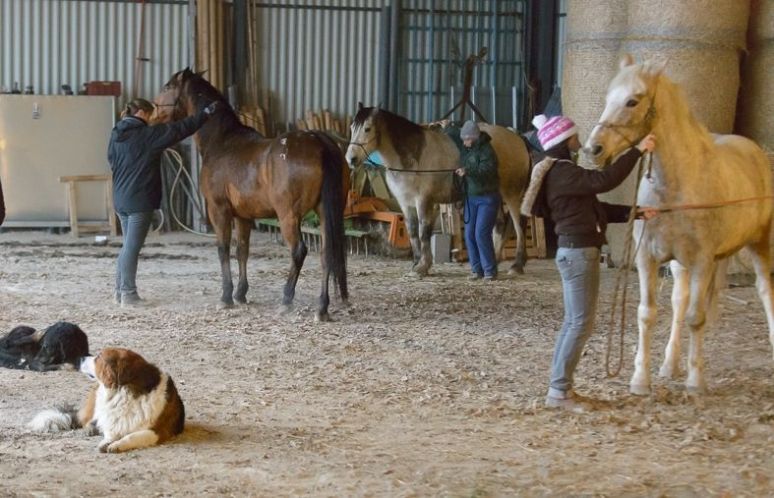 Flurry understood very quickly what I was asking.  Our problem area was that the hind feet swung out as the front feet moved around.  You’re looking for a true pirouette here, so it’s important that the horse learns to plant the weight on the back end as he moves the front around.  Marie, with the bay/appaloosa Swing, got her horse with so much weight on the back end later on that he reared – something he had never done before!  A step too far, for sure!  Pauline’s advice was to be happy with as little as ONE correct step initially, and try never to stop after an ‘incorrect’ step, where perhaps he moves the hind feet as well, or does crosses the moving front foot behind instead of in front of the other one.

We finished our session by performing the same exercises in the saddle.  Flurry astounded me.  He was focussed, light and responsive.  I rugged him up afterwards and put him out in the field once more.  I would have loved to have rewarded him for his efforts, but we are once again on a reward-free regime.  Sorry, Flurry 😦

I spent the rest of the morning nestled in the straw, watching the other classes and getting progressively colder. 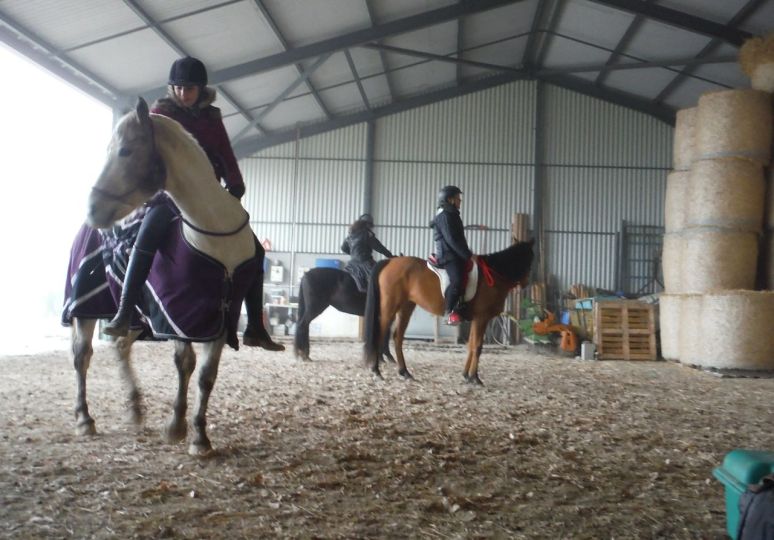 At lunch, I learned that MC, Marie and I would be the last group of the afternoon.  Grumble, grumble… I was cold and tired and lunch did not help to warm me up.  Without wanting to seem in a huff, I said to MC that I was going to go home for an hour or so.  Good idea, she said.  She ended up sleeping on Alexandrine’s sofa for nearly two hours, I went home and read in front of the fire and Marie also went home for a snooze.  Ahhhh… but I had no desire to shift from the fireplace and go back up to the farm!

It was still raining as I left Cereste, but a miracle happened.  I arrived at the farm the same time as a clearance, so our class was held in the outdoor arena.  Once again, we did some work from the ground before riding.  This time, I guess seeing as we had space, we worked on directing the horse from a distance.  We had two cones set up on the ground and we had to circle the horse around the first cone, walk or trot to the second cone and circle around that.  The horse must match the handler’s pace at all times.  If Flurry got ahead of me or started rushing (“YEAH I GOT THIS MOM! LET ME AT IT!”) I slowed him by either shaking the lead rope (phase 1) or waving the stick towards his head.  It was interesting to see how this exercise forced him to concentrate.  It was no longer a question of “Ho-hum, I’m being lunged on a circle” but he had to focus on my demands to match my speed, circle, stop and turn as requested. 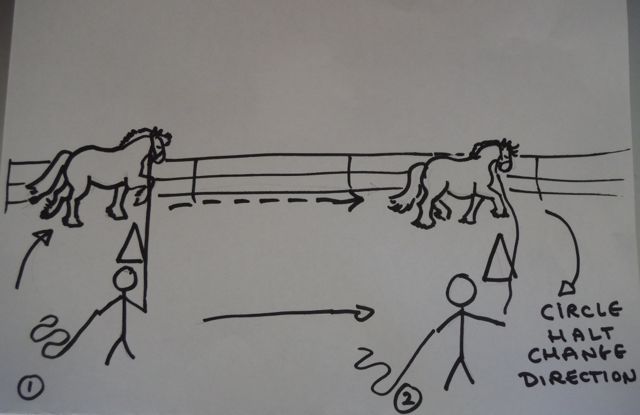 We continued working on a circle, but we introduced the notion of going sideways from the circle.  We used the arena fence to our advantage for this one, setting up our circle so that it was right beside the fence.  As the horse approaches the fence, you step towards his midline, reinforce by pointing or waving the stick if necessary and ask for a few sideways steps.  Flurry picked this up very quickly, but we do a lot of lateral work under saddle, so he’s quite supple. 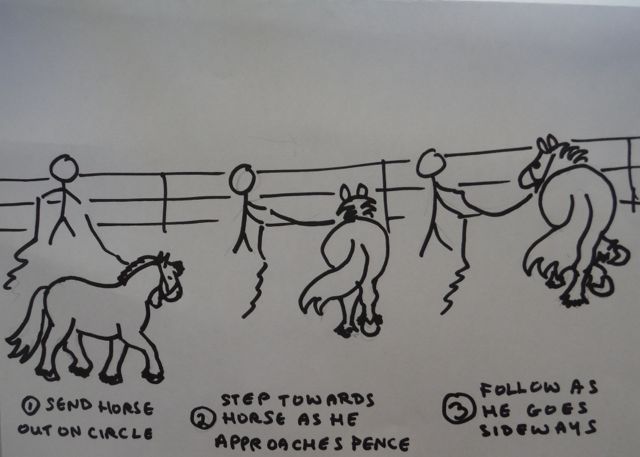 Throughout all of our groundwork, Flurry only made a couple of half-hearted attempts to nip me.  Each time I corrected him strongly, backing him up several steps before continuing our work again.  The message seemed to be getting through…

Finally it was time to ride again.  We mounted and started to work on our Stops.  Pauline set up three cones in a line, about ten metres apart.  Our mission was to stop at each cone just by using our seat.  She caught me out straight away lifting my hand each time I asked for a downward transition!  This was a habit that was unbelievably difficult to break.  Even though I wasn’t putting any weight on the rope, it’s still cheating.  Because we’re aiming for a light, responsive horse, the phases for a Stop should be seat, voice, stick (tapping the shoulder), reins.

We worked on our stops for a while; then she asked us to look for three variations in our walk and trot – very slow, normal and fast.  For ‘very slow’, I was using the same seat aid as for Stop, but asking Flurry to step forward as soon as he slowed down.  He was getting the idea, but Pauline said it should be s-l-o-o-o-w-e-r.  His slow trot was like a Western Pleasure horse shuffle (very comfortable, I have to say, but not at all ‘dressage’!) and his fast trot was not as good as it can be.  When he’s in the mood, he really makes a good effort at lengthening.

The aim of all this work is to have a horse that you can ride without reins; a horse that will respond to seat and weight aids alone.  In order to get there, you have to be very disciplined as a rider and always remember your Phases.  In real life, it’s difficult to stay this consistant.