I was almost finished my morning’s work.  I just had to bring water down to The Girls (you will meet them later) who are once again living beside Aero and Flurry.  I was checking that there was enough water in the tank on the Patrol when my phone rang.  It was Alexandrine.  The fly strips in Bubu and Galion’s shelter (yes, I have yet to introduce this pair, too) were broken, could I go up with a knife and cut them off?  Yes, no problem.  Indeed I had even noticed the broken strips lying on the ground when I was doing the feeds, but my butterfly brain had failed to retain the need to go back and sort them out afterwards.

I drove back up to the shelter and noticed that the electric fence at the back was sagging a bit.  Better tighten that up, I thought. I got out of the Jeep and thought, strange, I can hear running water…. I went around to the back of the shelter, to be met with this sight.

The water had gone this far

Thankfully, it had not been running very long.  Less than an hour for sure.  I would have heard the water running when I was doing the feeds.

‘scuse me, Martine, there seems to be something wrong with my waterer 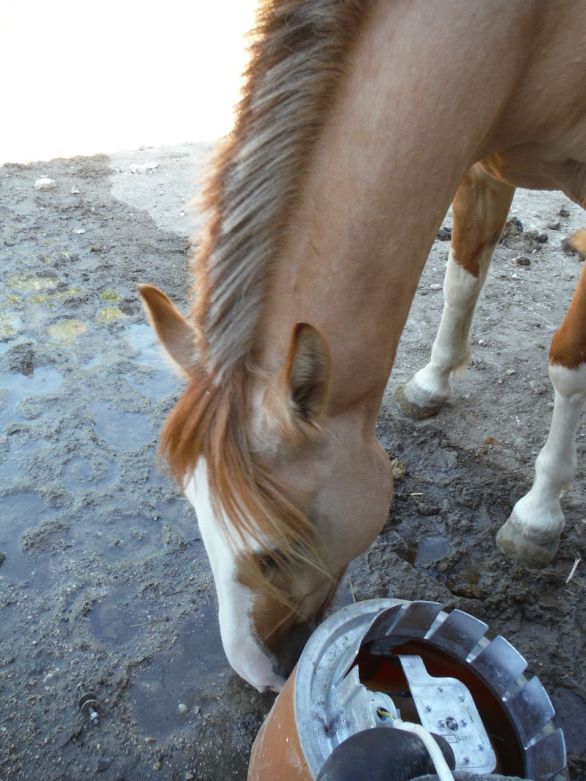 I whizzed as quick as I could down to the big shed and turned off the main stopcock so, right now, none of the automatic waterers are working.  Remy is in the process of repairing the broken one.  And possibly killing the culprit while he’s at it.  They are right in the middle of lavender harvest, one of the tractors has broken down and now this.  Gaaaaah.  Bloody horses. 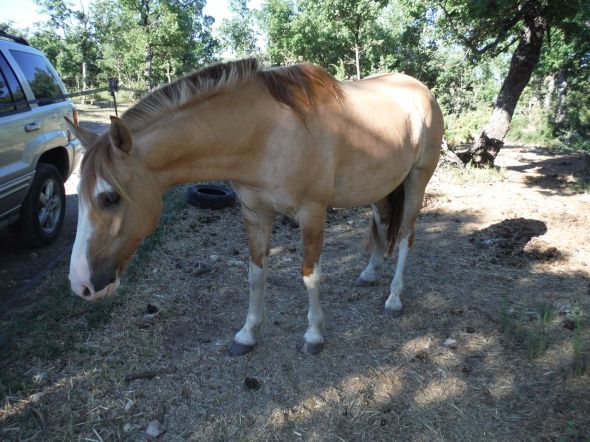 Amante is a five year old Criollo gelding, and he’s got the brand to prove it. 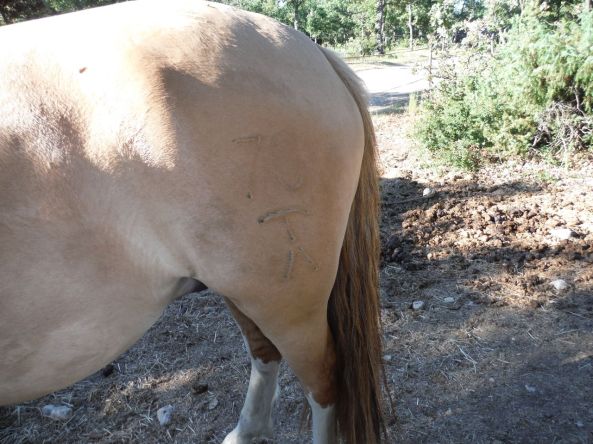 He’s less than 14.2 hands, I would say he’s more like 14 hands or 143 cm.  His owner is a tall man, and seems a bit big on him, but apparently Criollos are hardy little horses.  He was broken using Natural Horsemanship methods, and is really well trained.  He’s one of those horses who just want to do the right thing all the time.  He does have a nervous, reactive streak, though.  He kicked his owner’s grand-daughter a couple of weeks ago when she moved suddenly behind him, reminding everyone that you can’t be too careful with kids around horses.  Thankfully, she was fine.  Just bruised.

Amante been here for a couple of months now, and he’ll stay until September.  His owner has just bought a new house and will move his little horse when the paddock and field shelter are ready.

Amante means ‘loving’ in Spanish, and it’s true.  This guy is a little dote – when he’s not disassembling stuff, that is.