In the UK, and many parts of the former British Empire, Dec 26th is known as Boxing Day and is another public holiday.  The reason it’s called Boxing Day?  This was the day the household servants were given their Christmas boxes.

Ireland, of course, never accepted that it was  ‘part of the British Empire’, so we call the day after Christmas St Stephen’s Day.  It’s another public holiday, noteworthy in my part of the world for the Stephen’s Day meet of the local hunts and the Wren Boys.  Wren Boys?  The tradition was that a group of young lads would capture a wren and parade it through the town in a cage, singing “The wren, the wren, the king of the birds, St Stephen’s day was caught in the furze.”  These days they do it without a wren, or with a fake bird, dressing up in weird and wonderful ways and calling door to door, singing all the way.  There’s a nice article about it here, if you’re interested.

In France, Dec 26th is just another day.  Shops are open as normal – which means they’re closed for three hours in the middle of the day.  (I will never, ever get used to French opening hours… despite the zeal with which they observe their lunchbreaks, congés annuels (annual holidays) and their two half days per week, the local shopkeepers all think it’s perfectly reasonable to be open on Christmas morning.  EH?) 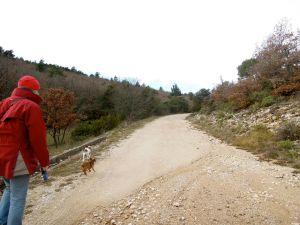 Anyway, our plan was for a nice, healthy hike along the top of the Luberon, to walk off some of the roast lamb and Christmas pud we ingested yesterday.  I fully admit that we cheat.  We drive up to the top of the mountain, park the car on the side of the road and set off on foot from there.  Much, much easier than hiking up from the valley.

We opted to stick to the larger trail, on the basis that it would be less muddy.  We were right, although there were large puddles from time to time. 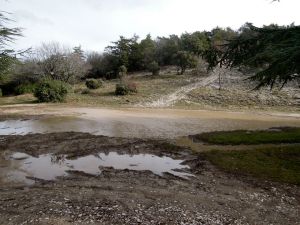 It’s a 4 kilometre hike to get to the first mini-peak, which I am reliably informed in 1020 metres high.  The final push was steep enough, and we huffed and puffed our way up…. 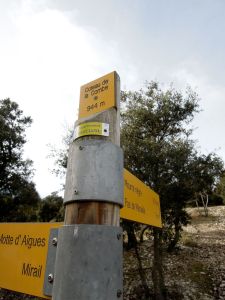 until at last we came out onto the bleak, windswept, baldy peaklet that was our goal.  The wind was so strong that we had to turn our heads away to breathe and the dogs became very agitated. I don’t know if they were afraid they’d be blown away or if they were just cold!

The views were, as always, astounding.

NE towards the Lure,with the Montjustin ridge in the lower right quadrant.

E towards the Alps

W, towards the real ‘top of the Luberon.’ It had snow on it!

S towards Mont St Victoire. The water glinting in the distance is most likely the Durance river

SE towards the Gorge du Verdon & the Mercantour

We didn’t stay long.  The poor dogs were so agitated that I barely managed to take these photos. We turned and started to retrace our steps, much to their relief.  Once we were below the brow of the hill, the wind eased off a bit and they relaxed again.

One more photo.  You can see the trail crossing over the next peaklet, but our route actually took us through the woods to the left.  Much easier, methinks. 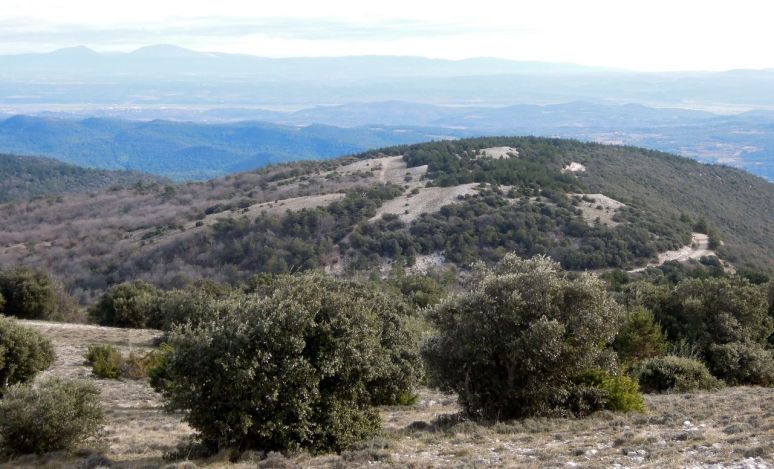 And finally, I was wearing my new gilet in ‘Don’t Shoot Me’ orange.  Thanks to my big sis for this pressy! 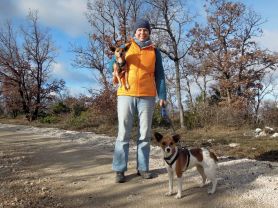 So after a good two hours and approx 9km, we made our way home again, to refuel before heading off to an eggnog party.