It was finally time for Tilou’s owner, N, to ride him.

But first, she had to practise lunging and working from the ground.  It’s interesting that the ground work is considered as much a part of the horse’s education as the ridden work.  I don’t know if this is a Natural Horsemanship thing or a French thing (or an Alexandrine thing!), but it’s quite different from the way I saw horses broken in Ireland – and, indeed, from the way I broke them myself.  Once the horse was backed, training sessions focused on ridden work.  Ground work just ‘happened’ in the course of the horse’s daily handling.  There was none of this ‘move the horse to the side’ or ‘back the horse up’ or ‘ask the horse to come forward’ stuff, which I now think is a shame.  It takes very little effort, but you end up with a horse who understands what’s being asked of him much better, which makes life easier later on.  Thinks like going into a trailer, or going into a small room for veterinary examination, or even placing a foot on a block for an x-ray and staying immobile would all be done quite easily. 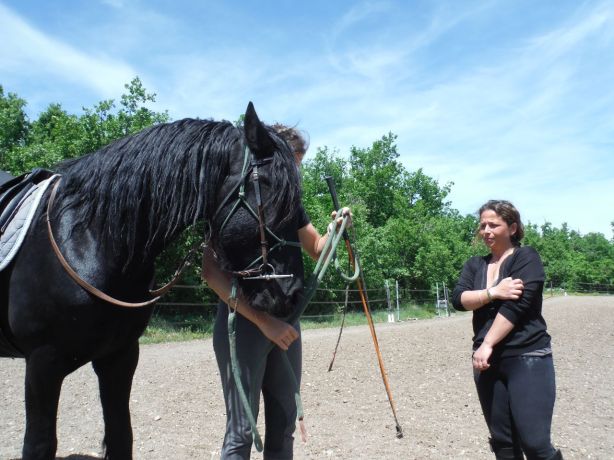 Anyway, N was to be in charge of Tilou from the start.  She had to tack him up, work him from the ground and then ride him all by herself.  Alexandrine was there to supervise, advise and correct, but she was trying to get N to do everything herself because Tilou would soon be going home 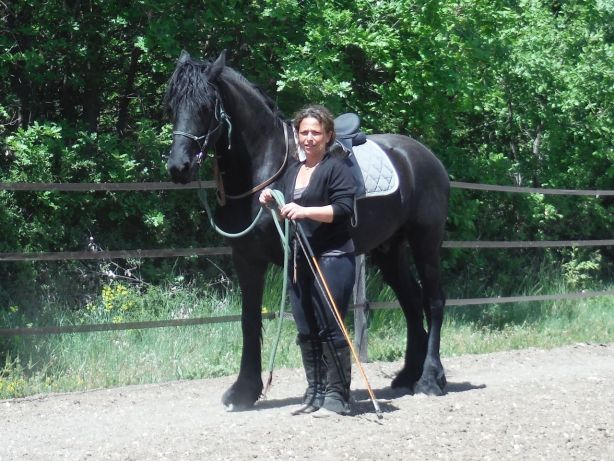 They did basic stuff first, like leading, halting, reverse and return. 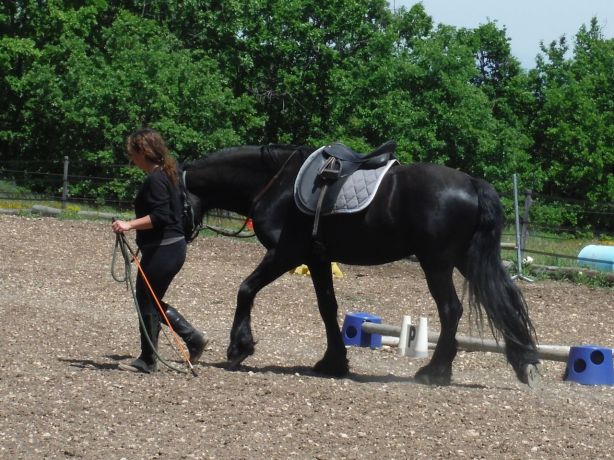 After that, it was on to lunging.  Like anyone being presented with unfamiliar equipment, N found the ‘carrot’ stick and the lunge rope a bit fiddly to handle. 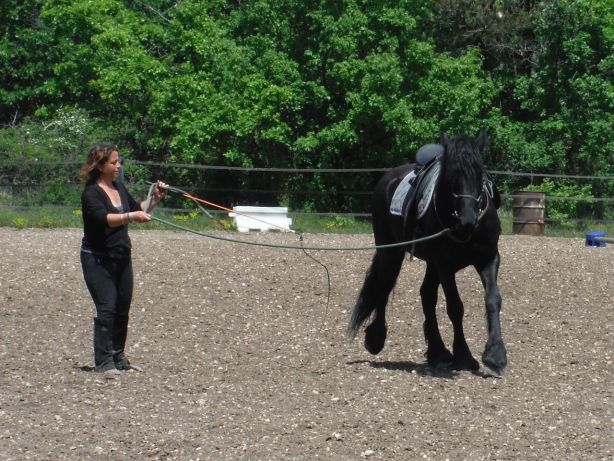 I can sympathise.  I’ll tell you a secret – one of the reasons I really wanted to improve my liberty work with the horses was so that I would no longer be juggling the stick and the lunge line!

The ground work all went ok.  With practice, N will soon be more confident handling the equipment and can then focus on what she’s asking Tilou to do, rather than how is she going to untangle the cord on the end of the stick from the lunge line.  Or from around the horse’s feet.  Like I said, I sympathise.  Been there, done that.

It was time to mount for the very first time.  She was a little nervous, but Alexandrine was very calm and confident about it all.  Tilou was lined up beside the mounting block and stood quietly while his ‘mom’ climbed on board. 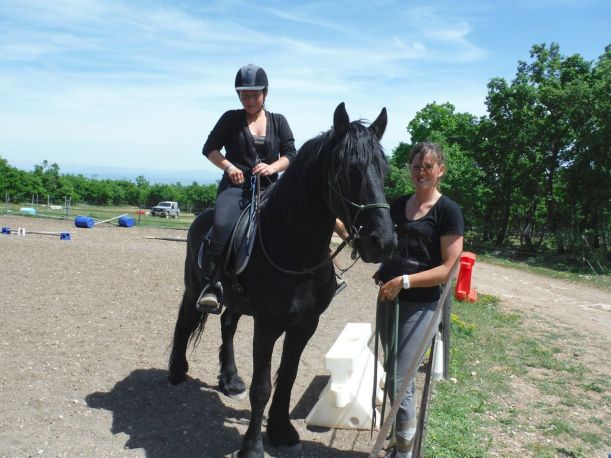 Off they went around the arena… 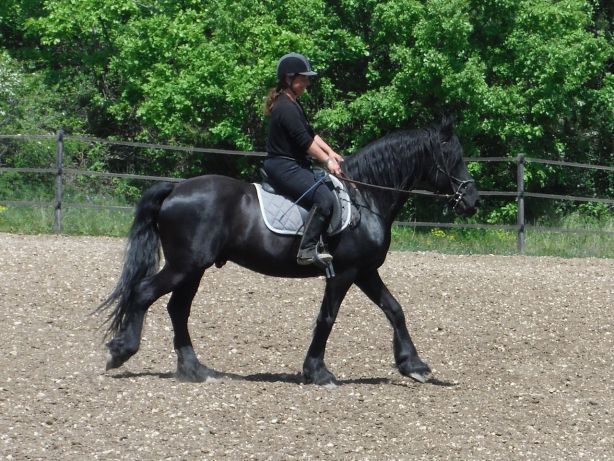 …cautiously at first and then more confidently. 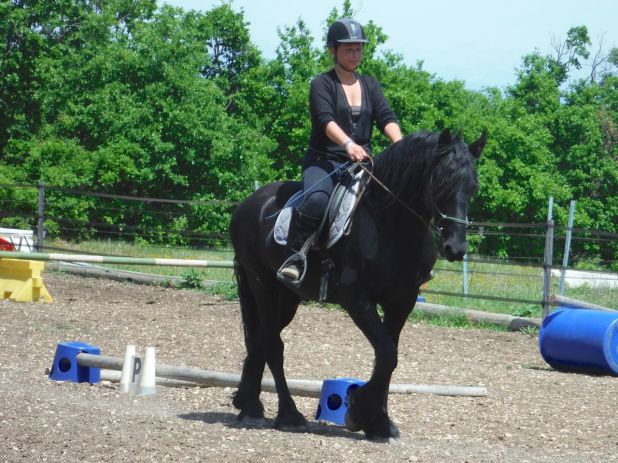 They just stuck to walk and trot and everything went perfectly! 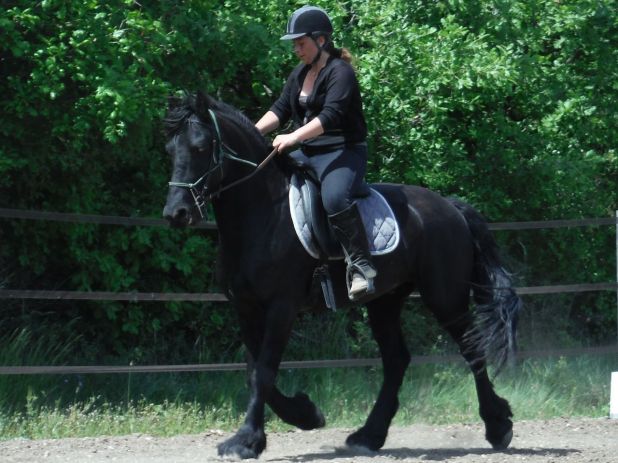 The session finished with one very happy lady! 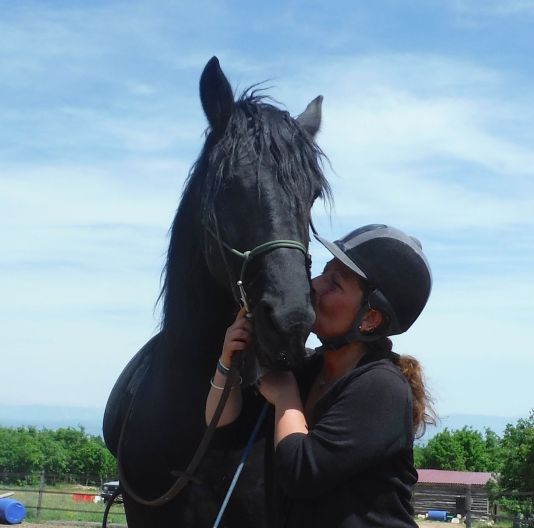 This was a great start to Tilou’s career with N, but in their next session, things went a bit awry.  N was cantering Tilou on the lunge and he pulled away from her, ripping the rope out of her hands.  Well, he’s a quick learner – we all saw that with the backing process – and he realised straight away that he had the upper hand here.  Alexandrine had to step in and even she could not hold him – he pulled away from her too.  It was back to square one – into the round pen and work on obedience.  Alex did the ground work for another two days afterwards and eventually she convinced Tilou that life would be easier if he maintained a circle around his handler while being lunged.

N’s nerves were rattled though.  Now she was afraid that she would be teaching Tilou bad habits and causing him to unlearn his early lessons.  I was able to sit in on one more session, when N was to be completely solo – Alex would not even be there.  We all hoped it would all go well…

If you’ve missed the other posts in this series, you can catch up here :