Oriane has had a steady stream of horses for breaking or for retraining throughout the summer.  When the time comes for a baby horse to go for it’s first ride out in the woods, it’s important to have a sensible older horse to help teach it how to behave.

Greenlee Escorts at your service!

Despite riding very little for the last month or two, Aero, Flurry and I have been doing occasional babysitting stints.  Aero has been an absolute star with the babies.  I’d swear he understands what’s going on.  Despite being terrorised by flies, he strides along confidently in front, or allows the baby horse to go in front for a while and calmly takes the lead again if asked.  Flurry is almost as good… but I always feel the tensions starting to build in him if things are a little strange.  Like the last day out, when we met first of all, the flock of sheep in a place where there have never been sheep before; then four donkeys (FOUR! One is bad enough, but four?) followed by two boys on noisy dirt bikes.  The flock of sheep was quite terrifying and needed some intense scrutiny before he deemed it safe it pass.  The donkeys – well, at that point the horse we were meant to be minding was out in front and clearly has no issues with donkeys.  Flurry scooted past in his wake.  The dirt bikes – actually, I wasn’t too worried about the bikes, he is pretty unflappable with machinery, and he proved me right, providing impeccable example to the baby horse on that occasion.

Last week we were escorting the two greys (coming soon on Just Passing Through!).  This week, Oriane asked me if I would escort her on the little Irish cob, Diamond.

Diamond is a mini-Irish cob.  She’s only about thirteen hands, but built like a brick sh*thouse!  She doesn’t have the typical Irish Cob laid-back temperament and has not been easy to break.  She is sensitive and nervous, spooking and looking at everything in the arena.  She is literally afraid of her own shadow when she is being ridden, which makes sense in a weird way.  Her shadow has changed; so she spooks at it.

Bring the quieter of your two horses, please, Oriane asked me.  She was not expecting an easy ride.

The quieter of my two… that would be Aero, then!  How times have changed, that he’s now my Mr Safety! 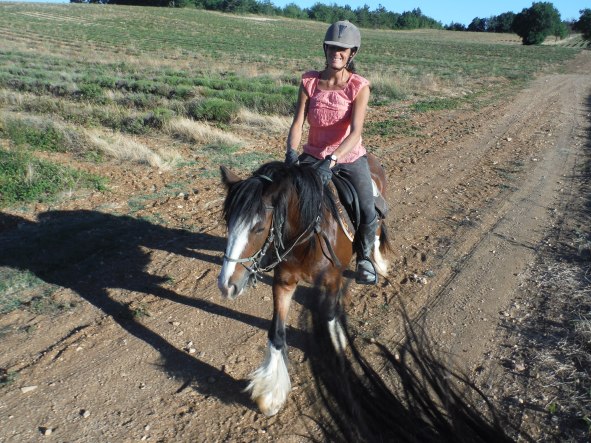 Love how Aero got his tail into this one!

So this morning, we accompanied Diamond on her first trek.  And she was a little gem.  A diamond, even.  She seems to be a horse whose natural environment is the great outdoors.  She was forward, interested and confident, whereas in the arena she just doesn’t want to move.

She wasn’t even bothered by her strange person-carrying shadow. 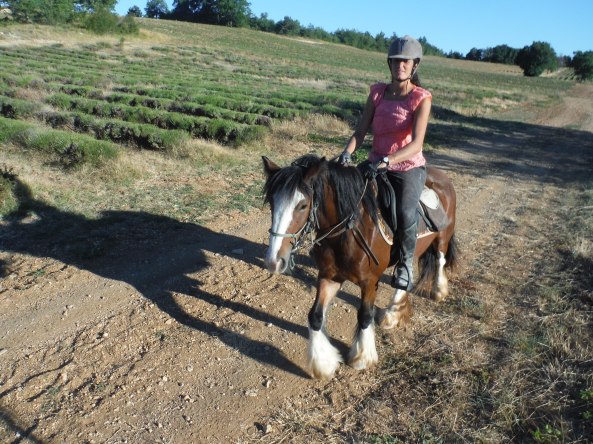 Our work here is done, Aero.

Let’s gallop off into the sunset.

Just Passing Through – Calando and Naghla